Manzoni opened a new studio in Via Fiori Chiari 16 and met Nanda Vigo, with whom he established a relationship. Manzoni’s principal focus was now the German ZERO group, as testified on the 13th of January by the exhibition ZERO at the Galerie Ad Libitum, Antwerp. Following the exhibition Castellani et Manzoni at the Galerie Aujourd’hui, Palais des Beaux-Arts in Brussels on the 17th of February, on the 9th of March Manzoni was one of the protagonists of the fundamental Nul, organized at the behest of Willem Sandberg by Henk Peeters at the Stedelijk Museum Amsterdam. He exhibited a number of Achromes including two in synthetic fiber and one with cotton wool balls, a number of examples of Merda d’artista and very probably his Linea lunga 1140 metri (Line 1140 Meters Long).

He also created two works specially for the occasion. The first was a vast panel with tufts of synthetic fiber, 1.35 metres by 3.30 metres. The second was a line of great length traced on a continual roll of printing paper provided by the local newspaper Het Vrije Volk. The operation was filmed for the documentary 0x0=kunst made by Gerd Winkler for Hessischer Rundfunk and transmitted on the 27th of June that year. Both works were subsequently destroyed.

He was at the Galerie Schindler in Berne with ZERO again on the 9th of June, while on the 4th of August he exhibited at the Galerie Delta in Rotterdam in Castellani Manzoni Schoonhoven and again in a group show on the 23rd of November. 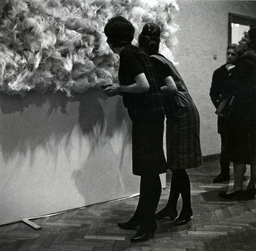 Achrome in fiberglass at the exhibition Nul, Stedelijk Museum, Amsterdam, 1962 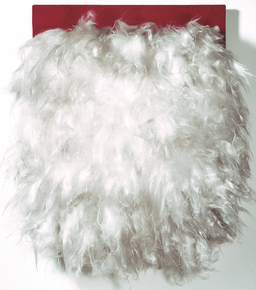 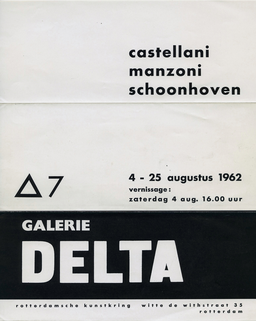