My First Achromes are from ’57 . . . [Some Creations - Some Experiments - Some Projects]

My first Achromes are from ’57: in canvas soaked in kaolin and glue: since ’59 the raster of the Achromes has been stitched by machine. In ’60 I made others in cotton wool, in expanded polystyrene, I experimented with phosphorescents, and others soaked in cobalt chloride which change color with variations in the weather. In ’61 I continued with others in straw and plastic and with a series of pictures, always white, in cotton wool balls and then hairy ones, with clouds, in natural or artificial fibers. I also made a sculpture in rabbit skin. In ’59 I prepared a series of forty-five Corpi d’aria (Bodies of Air) (pneumatic sculptures) with a maximum diameter of 80 centimeters (with a height, complete with base, of 120).

In ’60 I realised an old project: the first sculpture in space: a suspended sphere supported by a jet of air. Using the same principle, I then worked on “absolute bodies of light”, spheroids that, supported by the suitably oriented jet of air, whirled dizzily about themselves, creating a virtual volume.

All these lines are closed in sealed boxes.

In 1960, during the course of two events (Copenhagen and Milan) I consecrated hard-boiled eggs to art by putting my fingerprint on them: the public was able to come into direct contact with these works, devouring an entire exhibition in seventy minutes.

Since ’60 I have sold the prints of my right and left thumbs. In ’59 I thought of exhibiting living persons (others, deceased, I instead wanted to place and conserve in blocks of transparent plastic); in ’61 I began signing people “to exhibit them”. I provide these works of mine with a Certificato di autenticità (Declaration of Authenticity).

Again in January ’61 I constructed the first Base magica (Magic Base): any person, any object placed on it, was a work of art for as long as they were on the base: I made a second in Copenhagen: on the third, in iron, of large dimensions, placed in a park in Herning (Denmark, 1962) rests the Earth: this is the Socle du monde (Base of the World).

From ’58 to ’60 I prepared a series of Tavole d’accertamento (Works of Verification) of which eight have been published as lithographs, collected in a portfolio (geographical maps, alphabets, fingerprints…).

In music, in ’61 I composed two Afonie (Aphonias): the Herning Afonia (for orchestra and audience) and the Milan Afonia (for heart and breath).

Currently (’62) I am working on an electronically controlled “labyrinth” that may perhaps be used for psychological tests and brainwashing. 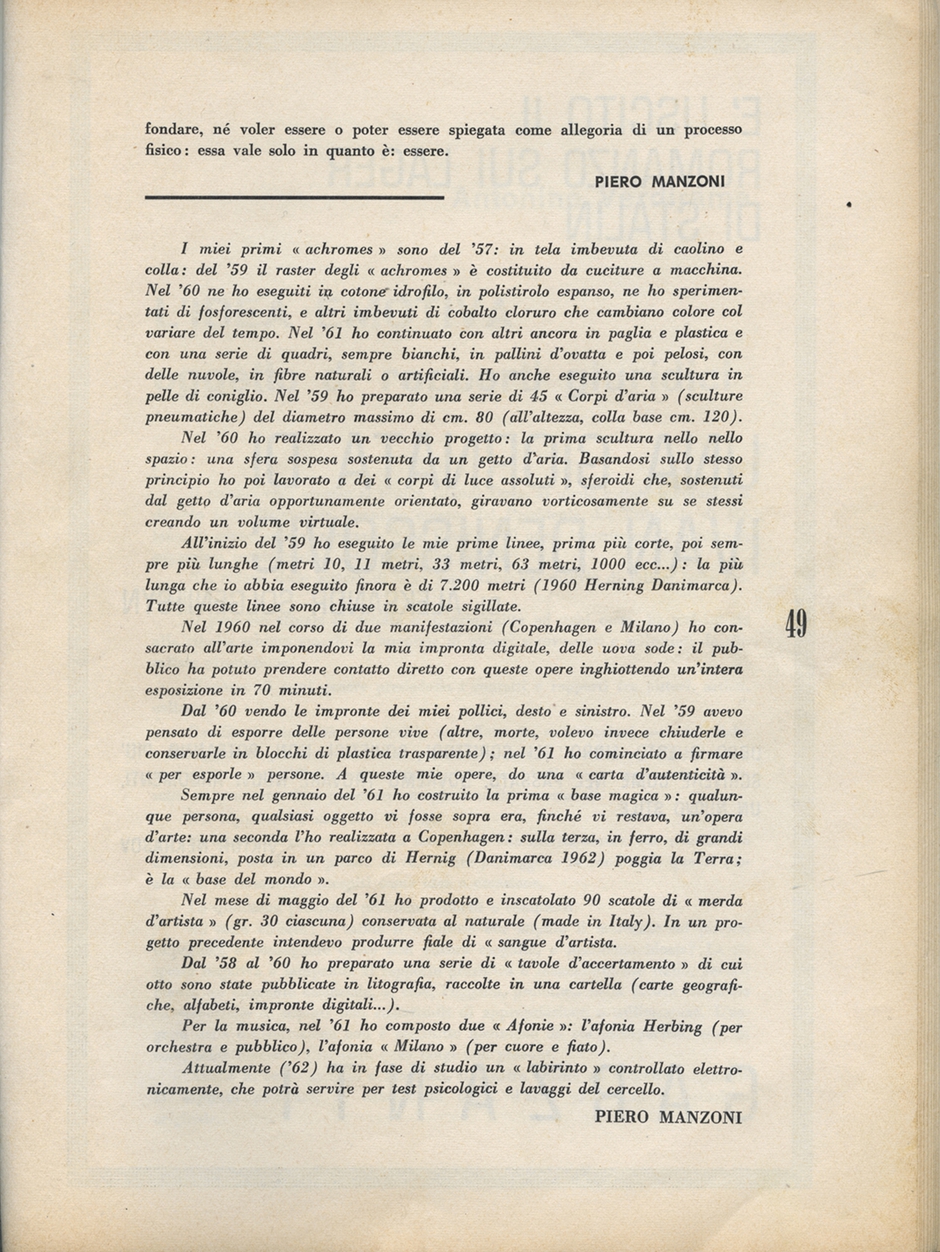